Would you like to switch to the accessible version of this site?

Don't need the accessible version of this site?

Stephen has earned a Social Service Worker (SSW) certificate from Vancouver Community College, a B.A. in Philosophy from the University of British Columbia, as well as a Master of Social Work (M.S.W.) from the University of Toronto; he has been practicing since 1989. In addition to his Private Practice since 2005, his clinical practice experience includes working within academic teaching hospitals, Toronto Western and Toronto General Hospitals of the University Health Network, Bloorview Kids Rehab, and community agencies such as Family Services of Greater Vancouver and PEAK House Residential Alcohol and Drug Treatment Program for Youth and Families. Additionally, Stephen was a Professor at Humber College and an Adjunct Lecturer at the Factor-Intewash Faculty of Social Work, University of Toronto.

He is a respected international presenter, educator, researcher, and clinician in the area of psychosocial health, and has been interviewed by national and international newspapers including appearing on television for the CBC's The National.  In addition, he has published numerous peer-reviewed studies in academic health care journals. He has earned clinical certificates in Cognitive Behavioral Therapy and Emotionally Focused Couples Therapy. Stephen continues to participate in ongoing professional development.

Originally from Vancouver, B.C., Stephen has lived in Toronto since 1999 with his wife, son, and Golden Retriever, Stella -Mae. 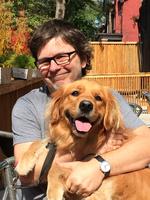